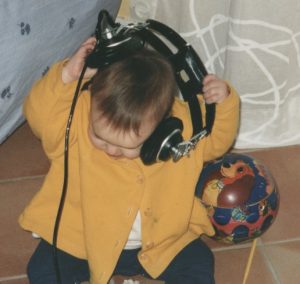 At a young age, listening seems to already be slightly problematic…

As he was giving an interview to «  Sources Vives » Alfred Tomatis answered the following question in this way:

– Sources Vives : For you what exactly is listening?

– Docteur Tomatis : Listening is an extremely high level faculty. It is perhaps even the door to consciousness itself, but we have difficulty defining it. Everyone is persuaded they know how to listen.

There is, however, a huge difference between perhaps hearing now and again and that of seizing the sound, defining it and knowing how to participate. One could say that listening requires great will power.

To listen you need to be suspended like an antenna and to perceive to the utmost everything that’s happening through all the organs of perception.

I often say, but it can be proved anatomically, that man is an ear in totality. Everything is in vibration all the time and everything is perceived through sound, much more than we think: we are in a sonic bath.

Someone doted with an exceptional listening capacity would understand what his body is telling him – which is not nothing – and would thus be able to withstand many illnesses notably all the psychosomatic ones.  These arise because a a given moment nothing more penetrates the part of the body that has been abandoned as there is no longer any information either perceived or sent.

Someone doted with this exceptional listening capacity would be ready to listen to the person in front of him, it’s not easy ! No need to mention how many social, family or other conflicts would be attenuated.

Finally, he would be able to listen to this Voice which is that of Creation. He would have the opportunity to discover the deep resonance of the Creator in all things. Whence, as in the prologue or the Rule of Saint Benedict: “Listen my son to your Master’s voice. Open the ear of your heart”, he would become familiar with this cordial listening, which is only offering and opening.

I think that the Ancients knew much better than us how to listen and with less technology focused more naturally on listening. And if today communication is being spoken if everywhere, it’s because people are looking for it.

It should indeed be the norm that be communication and even a state of communion between men. This dimension is of all the one which is most to be sought after and if a man starts to listen he experiences his conversion.

His conversion, that is, transforming his attitude with respect not only to the other as the end of communication, but even more of himself when within an intimate relationship we find ourselves face to face with our own being. From this moment on, a whole opening occurs which is that of interiorisation. In this way the structure of listening appears, which takes us within ourselves and as far as listening to the Word of God.