It was whilst treating the problem of occupational deafness that Alfred Tomatis was led to to emit the hypotheses concerning the relationships existing between audition and phonation or the ear and language.  These three laws are the basis of the science of audio-psycho-phonology.

Whilst examining workers with auditive damage following long periods of work at the engine test beds of the French Air Force he observed that auditive damage was always accompanied by alterations in the voice. He therefore started to wonder if it wasn’t the faulty audition which was the cause of the vocal deficiency. 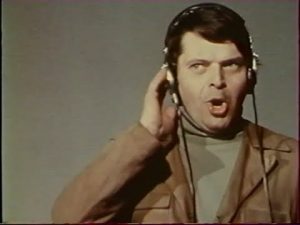 A more detailed analysis of the significant decrease in auditory perception of certain frequencies allowed him to observe that the frequencies not integrated by the ear were precisely those that were absent in the vocal spectrum of the subject.

This was the first law which he formulated as follows :

“The voice contains only what the ear hears”

“the larynx only emits the harmonics that the ear can hear.”

In a communication to the French National Academy of Medicine on the 4th June 1957 Professor Raoul Husson, Raoul Husson took up this study under the title “modifications phonatoires d’origine auditive et applications physiologiques et cliniques” coining the term “Tomatis effect” to describe the striking resemblance between the auditive curves and the vocal output of subjects with auditive deficiency. The presentation was given by the Professor Molonguet who later became President of the Academy and proved one of Tomatis’s staunchest allies.

The second law is the corollary of the first :

“If the damaged ear is given the possibility to hear correctly the compromised frequencies, these are instantly and unconsciously restored in the vocal emission.

The third law, the “ law of retention” highlights the possibility of being able to condition listening and through this education to modify phonation.

“The auditive stimulation conducted for a determined period modifies, through a phenomenon known as remanence, the self-listening posture of the subject and in consequence their phonation”.

On the one hand the functioning of the ear sets in motion the muscles which modify the position of the osteo-musclar block in the middle ear and on the other hand, their functioning will, under the improved control of the vestibule, influence the phonatory system acting under the effect of a whole series of muscles controlling the pharynx, the oral cavity, the tongue and the lips. These muscles of audition and phonation are themselves controlled by an innervation apparatus belonging to the same neural network.